With the support of the hiking community, we're saving backcountry trails like Angry Mountain from falling off the map. | by Rachel Wendling

The Angry Mountain trail was created for the adventurer. Make it a day-hike and enjoy the panoramic views of Mount Rainier and Mount Adams along the final ridgeline. Create a loop with the nearby Lily Basin connection and spend a blissful night under the stars at Hart Lake. Or, use it as a back-end accesses point to Goat Lake, Jordan Basin and the famed Snowgrass Flat by crafting a multi-night expedition.

The possibilities are endless — if you can make it there.

Recent conditions along the Angry Mountain trail had been preventing hikers from using the trail to its full potential — or even at all. Dwindling public funding led to a prolonged maintenance drought along the length of the trail, while years of seasonal storms wreaked havoc on the heavily forested ascent. The build-up of fallen trees and overgrown trail corridor became so severe that it would turn away even the hardiest of hikers. Reaching the summit became a test of acrobatics, route-finding and mental fortitude.

The Angry Mountain trail was slowly fading away into the forest, severely limiting hiker access to the western flanks of the Goat Rocks Wilderness.

Nestled between Mount Adams and Mount Rainier along the Cascade Crest, the Goat Rocks Wilderness has earned a reputation for stunning scenery and draws more adventure-seekers every season. A major portion of the region's trails reside above treeline and along ridge lines — giving hikers a 5-star view of the area's namesake peaks from almost anywhere they wander. The Pacific Crest Trail serves as the backbone to the Goat Rocks, running for 31-miles across the 108,000 acre wilderness and intersecting with 14 additional trails.

Once home to a robust trail network, road washouts and storm damage have restricted hiker access to only a handful of trails into the wilderness. With limited entry points, hiker use has been concentrated to only a small subset of the available trails. Popular areas like Cispus Bain are bustling with hikers on a sunny summer day, while nearby areas like Angry Mountain and Lily Basin more often resemble a ghost town.

These underutilized locations are key to dispersing hiker use around the wilderness and maintaining a sustainable trail system that meets a variety of hiker needs. The solitude and steep climbs found along Angry Mountain may not be everyone's cup of tea — but for many, places like this are an ideal outdoor experience. We've worked on trails across the Goat Rocks Wilderness from Nannie Ridge to Packwood Saddle and the Coyote Trail and we've already seen the impact that opening up trails can have on the larger trail system.

A Trail iN Disrepair

So, just how gnarly had the Angry Mountain trail become? A handful of brave hikers and trip reporters attempted to reach the terminus of Angry Mountain before our volunteers got to work — and their first-hand stories are a testament to the hazards and former state of the trail. 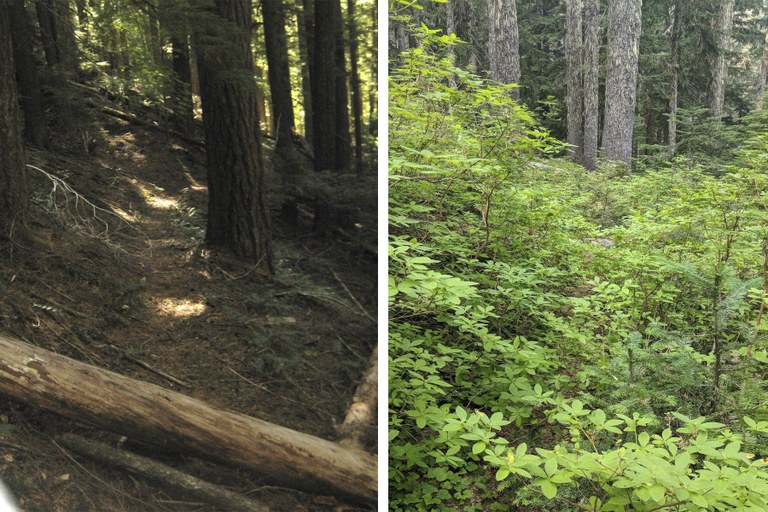 Left: one of several hundred trees strewn across the trail. Photo by trip reporter voxxjin. Right: Brush so thick it is near impossible to discern what is trail and what isn't. Photo by Erika Haugen-Goodman.

Back in 2013, trip reporter voxxjin decided to check out the seldom talked-about trail — two years before our first volunteer trip in the area.

After a few miles of hiking and crossing over several dozen blown down trees, voxxjin was stopped in their tracks. After cobbling over one-too-many fallen trees and an unfortunate run in with a wasp nest, they never made it to the top.

“While some places the trail can be easily followed; in many other areas it practically disappears. Several times I had to scout around to see where it picked-up again,” they recalled. “There was no other way around the blowdown, and I didn’t feel like messing with the yellow jackets again. So I never made it to the top. I was disappointed that I couldn’t finish.”

“While some places the trail can be easily followed; in many other areas it practically disappears."

The following year, voxxjin returned to the trail with a renewed hope of reaching a stunning summit view. And while they finally found the view, their journey to the top was hardly an improvement.

"This wasn't a hike so much as it was an obstacle course ... Once you hit the Goat Rocks Wilderness, the maintenance stopped. From this point on, I had to step over, crawl under, and hike around dozens and dozens of blowdowns. Easily over a hundred each way. It felt like I encountered a blowdown every 50 feet.”

Although the trail is listed as a stock trail, it became virtually impassable to even the nimblest of hikers. The conditions had become so dire that the trail was almost removed from the map.

Wendy Wheeler Jacobs, a mapper for Green Trails Maps, hiked the Angry Mountain trail for her job — collecting on-the-ground research and reporting back to her team with the conditions she encountered.

“When I completed hiking the Angry Mountain trail, I called up my boss at Green Trails Maps, and said you have to change this on the map to an unmaintained trail," she said. "There is no way I would recommend anyone taking this, and I just think it’s too far gone. It's a lost cause; there are so many trees down and I'd hate to see people going there thinking they are going to make it to the top. I had completely written it off.”

“It's a lost cause; there are so many trees down and I'd hate to see people going there thinking they are going to make it to the top. I had completely written it off."

It was no surprise that visitation to Angry Mountain had trickled to a stop. Trip reports for the illusive trail were practically non-existent, and those present told of a trail that most would not dare visit. The Angry Mountain could have easily faded into the background and no one would have been the wiser. 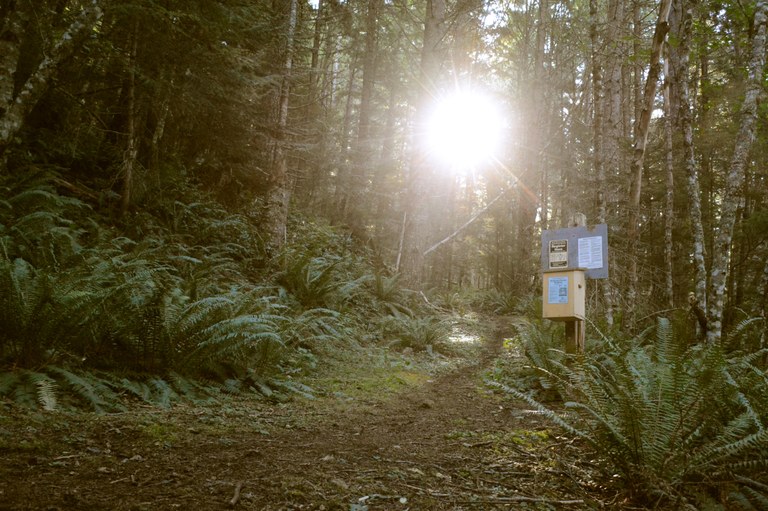 After hearing from hikers and land managers about the state of the trail, we sent out a team of volunteers to scout it for themselves and take note of the work needed to save it. A longtime WTA volunteer and assistant crew leader, Gabe Smith, first visited Angry Mountain during the summer of 2014 to see the workload in person.

"[We] were hiking it to scout it, to see what it was going to take to get Angry Mountain opened back up — and also Lily Basin," Gabe described. "We started at the Lily Basin trail and came through and connected. Once we got into this area, we obviously discovered what the problem was. We counted over 300 trees down in this section — from the switchbacks to the trailhead. And we realized that it was going to be a long haul to take care of this."

We knew that with the help of hiking community and nonprofit partners like Back Country Horsemen of Washington, we could put in the work required to save this trail from disappearing forever. So, in 2015, we supported our first Backcountry Response Team along the Angry Mountain trail. And then we decided to keep coming back.

Over the past five summer seasons, we've seen more than three dozen volunteers and more than 2,000 hours of volunteer labor have go into the Angry Mountain trail. It was an uphill battle year after year — the grade was steep, water was scare, and winter storms brought down more fallen trees after each season. But morale stayed high throughout — and help from our friends didn't hurt, either.

In addition to the WTA crews working in the area, the Angry Mountain trail benefited immensely from the folks at Backcountry Horsemen of Washington. Before our annual summer trips, volunteers on horseback would ride the trail and report back to WTA crew leaders with updated conditions and the location of potential work-sites. They also donated many hours towards logging out sections of trail and even cached water for WTA volunteers when they knew that running water was sparse.

Ken Vandver, a volunteer crew leader for WTA, has been leading the charge on Angry Mountain for the last four years — and grew a personal connection with the work taking place, despite it's difficulties.

"The first year, we worked up to what's called Boundary Camp," Ken recalled as he took a break from sawing. "The second year, when we came out to scout it, we had about 30 logs down between the trailhead and Boundary Camp." 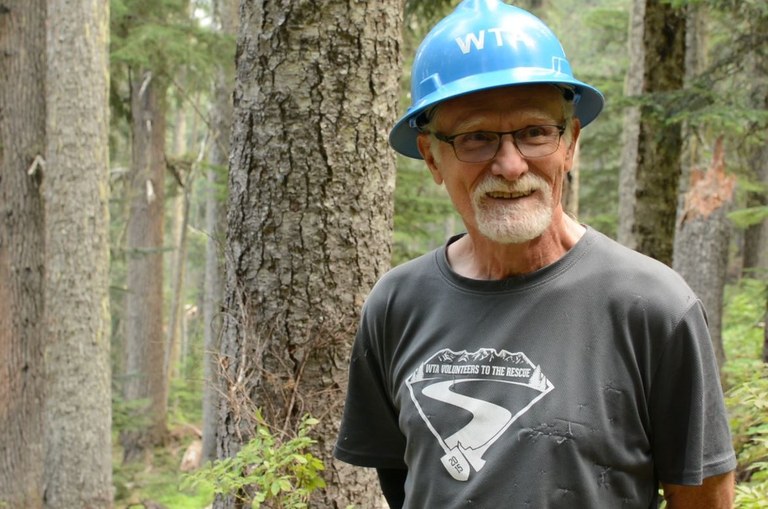 Ken Vandver during his third year of work at Angry Mountain. Photo by Erika Haugen-Goodman.

Even with the setbacks, our volunteers kept coming back — knowing that the end was still in reach.

"The multi-year project to clear Angry Mountain has been a testament to the power of what is possible when we work together," said Southwest Regional Manager, Ryan Ojerio. "Alongside our trail volunteers, volunteers from Back Country Horsemen of Washington scouted annual conditions to prepare our crews for what lay ahead, pitched in on the log out effort, and cached water along the otherwise dry trail — which was crucial for our final push to the summit this summer. We could not have accomplished all that we have without their support."

In total, our crews cleared over 400 logs to open up the entire 8.2-mile trail. They also focused time cutting back overgrown brush and improving the trail tread over 2 miles of the trail corridor. As of September 2019, the Angry Mountain trail was completely clear from trailhead to summit, without a single fallen log blocking the trail.

This years-long success story would not have been attainable without the help of our devoted volunteers who donate countless hours into trail maintenance and our members whose donations have sustained this effort. We can't thank you all enough for your support in keeping these lost trails found.

Read more about our Lost Trails Found campaign and find out how you can help at wta.org/losttrails.