WTA crew leader Rebecca Wanagel and Washington Trails contributor Kelsie Donleycott have been recognized as super-volunteers this year. Read why.

This month, WTA learned that Friends of Olympic National Park recognized two wonderful women who are also key members of our community. These women both volunteer with us, sharing their knowledge with new hikers and volunteers. But they also each spend a good chunk of their free time volunteering in Olympic National Park in other ways. Their dedication is inspiring, and we're thrilled to see them recognized.

Drawing on her talent for teaching and her passion for sharing skills with others, Rebecca (known as Becca to her WTA friends) became a volunteer crew leader with us three years ago. Working on trails brings her joy, but so does using them; her backpacking trips are legendary for their length, difficulty and breathtaking destinations. Becca fords the Duckabush River on her way out of Lacrosse Basin, the first place she went after her cancer diagnosis. Photo courtesy Rebecca Wanagel.

Becca adores Olympic National Park, spending vacations (and much of her volunteer time) there. But last year the park was particularly meaningful to her. It's where she found respite and rejuvenation in the mountains during a battle with breast cancer, drawing strength from the mountains she loves.

After her first chemo treatment, she ventured to Lacrosse Basin.

"[It was] the first place I headed to keep myself grounded."

Becca was happy to find she could backpack between chemo treatments, and so planned a trip to Queets Basin, a traverse of the Bailey Range, and a big backpacking trip via Rugged Ridge up the Bogachiel River to High Divide.

And, as if that wasn't enough, she found the time and strength to give back to those gorgeous mountains, too. In July, making good on a promise she made before she was diagnosed, Becca and three other volunteers (including fellow Most Inspirational Friend Dave Skinner) trekked to the Blue Glacier to pack out aluminum pipes left over from researchers studying the glacier. She calls Skinner the real hero of this cleanup. 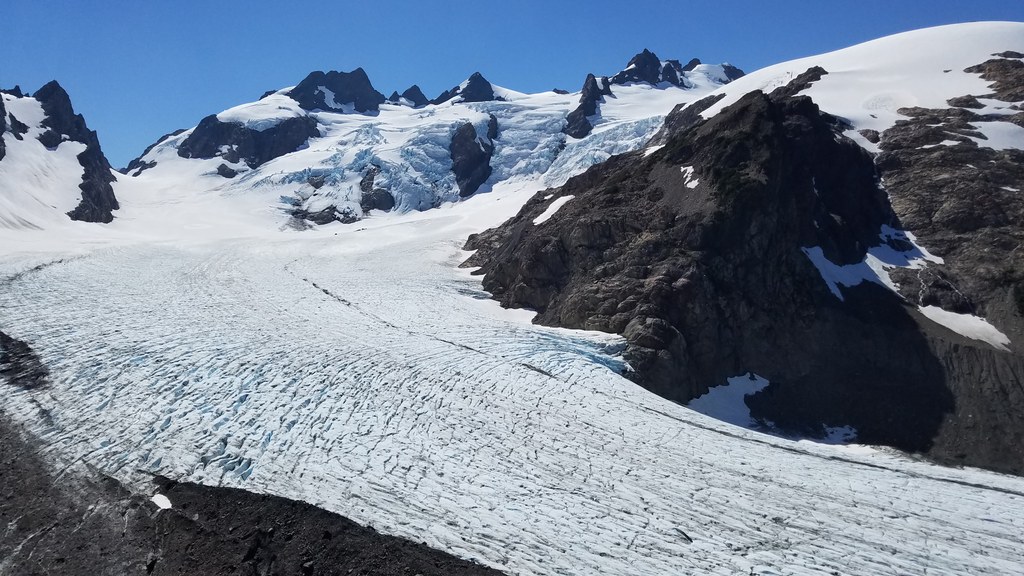 Becca, Skinner and their crew hiked the pipes, which are melting out as the climate warms, to the terminus of the Blue Glacier. Photo by Wild Side.

"The project was a culmination of years and years of work by Skinner to collect and consolidate them and move then to the bottom of the terminal moraine. We helped him haul them off the glacier up to the top of the moraine, where we hope the ONP personnel will fly them out."

The project involved an 18-mile approach. Becca estimates that they moved about 80 aluminum pipes that weekend.

Her courage in the face of a challenging illness is motivating and inspiring. The Olympic mountains are a purer, better place thanks to her dedication.

Becca will be giving a presentation on those summer journeys, complete with photos and a short talk, on Tuesday, March 27 at 7:00 p.m. in the North Olympic Library meeting room, at Lauridsen Blvd. and Peabody St. in Port Angeles. The event is free and open to the public.

While Becca finds refuge in the mountains, Kelsie Donleycott cares for the coastline. This year, Friends of Olympic National Park and Washington Coastsavers recognized Kelsie for her dedication in cleaning up the beaches around Ozette every April and September. Kelsie and some friends at a past coast cleanup at Sand Point. Photo courtesy Kelsie Donleycott.

She chronicles her coast cleanups and other adventures in her trip reports, and has participated four times in WTA's annual fundraiser, Hike-a-Thon. She's also a longtime contributor to Washington Trails magazine. Writing for our Hike It! section, she's helped readers discover places to visit on and near the Olympic Peninsula since 2013, from Twanoh State Park to the Mary E. Theler Wetlands.

Kelsie's commitment to cleaning up the coast is truly admirable. She invites her friends and family, making a full weekend event of the cleanups. They pack camping gear to the beach, set up camp, and start cleaning. They've had outings where they made multiple trips to the dumpster, which can be three or more miles away).

And the way they carry the trash is creative, too: Kelsie and her friends have been known to use old pack frames, yokes made of driftwood, or driftwood poles, like in the photo above. They've even used trash as a method of carrying other waste; fishing lines and ropes become nets to hold enormous quantities of beach trash. A pristine section of beach at ONP, thanks to Kelsie's efforts. Photo by Kelsie Donleycott.

If you're inspired by these ladies to do some volunteering of your own, join one of our work parties, or stay tuned on Washington Coastsavers' site; their next event is on April 21.