Skip to content
Vesper Peak Vesper Peak is definitely not for the novice hiker, but for those thirsting for one step beyond hiking into backcountry adventure, it's a good leaping off point. The smooth, low angle granite of Vesper's upper reaches make for relatively easy off-trail travel and beginning routefinding. https://www.wta.org/go-hiking/hikes/vesper-peak https://www.wta.org/site_images/hikes/1-summit.jpg/@@download/image/1---Summit.jpg

Vesper Peak is definitely not for the novice hiker, but for those thirsting for one step beyond hiking into backcountry adventure, it's a good leaping off point. The smooth, low angle granite of Vesper's upper reaches make for relatively easy off-trail travel and beginning routefinding. Continue reading


(29 votes) Log in to rate
Saved to
My Backpack

358 trip reports for this trail

If you've recently come down with a case of summit fever, experts recommend Vesper Peak for initial treatment due to its low incidence of side effects. People who have taken the route to the top report feelings of sudden euphoria with minimal exposure and relatively painless routefinding.

Follow the Sunrise Mine Trail #707  to the point where it intersects Vesper Creek. Rather than following the trail to the right towards Vesper Lake, cross the creek at its narrowest point. A rough, but well established trail proceeds straight up the opposite bank, quickly reaching a broader shoulder.

For the next fifth of a mile, the trail meanders gently through heather and rock before steepening as it passes through a slope of low cedar and other subalpine evergreens. At times rocky and at others a slick muddy rut, the trail soon pops over a lip onto a flat spot below a rocky apron, briefly trailing along an exposed edge that offers views of Vesper Lake below. Soon the vegetation gives way to the smooth granite of Vesper's upper reaches. Here, the scramble begins.

As off-trail scrambles go, this is one of the most straightforward, which makes it ideal for beginners. It is mostly low angle rock, making a major fall relatively unlikely. This isn't to say there is no risk. Falls of 10-20 feet are certainly possible in places, and it’s also possible to wander into parts of the mountain with greater exposure; but accidents and injuries here are rare. Exercise good judgment and stay within your abilities.

Head in a straight line towards the highest point, more or less directly ahead when looking uphill. You want to follow a subtle rib - if you find yourself in a bit of a gully, you may have gone too far left. If you find yourself with air beneath your heels, you’ve wandered too far right. If you have to err to one side or the other, left is the better choice.

As you climb through Vesper’s sea of granite, you will only occasionally and for short distances need to complement your feet with hands. Routefinding is a breeze - almost any line will do, and if things get impassable, a quick correction to either side usually presents itself. A steep snowfield often lingers just below the summit, but can be avoided by a quick jog to the left (to the right here is the most dangerous terrain on the east flank - steep rock with greater exposure requiring some technical moves to complete).

If this is your first off-trail summit (and maybe even if it's your tenth or hundredth), the view from the top will have you feeling like the master of the mountains. Vesper sits in the middle of a lattice of intersecting ridges running between Del Campo Peak, Morningstar, Sperry and Big Four. Between Vesper and Big Four, the smooth ridge of scoured granite would look right at home another couple of thousand of feet higher in elevation. Northwest of the summit, the Vesper Glacier descends a deep chute to Copper Lake, tucked from view behind the rarely seen and surprisingly red, chossy backside of Big Four.

Note there are no bridges for water crossings on this trail. Cross at your own risk

From I-5, take exit 194 for Highway 2 towards Snohomish/Wenatchee. Drive for nearly 2 miles, then take the left exit for WA-204 E towards Lake Stevens for 2.5 miles. Turn left onto WA-9 N and drive for 1.7 miles, then turn right onto WA-92 E. After 1.5 miles on this road, arrive at a traffic circle and take the second exit to stay on WA-92 E.

After nearly 6 miles, arrive at a second traffic circle and take the second exit onto Quarry Road. Proceed through two more traffic circles, always staying on Quarry Road, before arriving at an intersection, where you will turn left onto the Mountain Loop Highway (Hwy 530). Drive for 27.5 miles and then make a right onto Forest Road 4065. Drive about 2.5 miles to the end of this road to the trailhead. 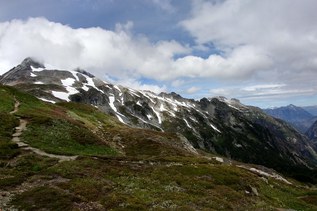