Skip to content
Reviving an Old Route to the Pratt WTA has been hosting annual work parties and Backcountry Response Teams along the Pratt River Trail since 2016 as a part of our Lost Trails Found campaign. We're working to save this alternate access point into the Alpine Lakes Wilderness and ensure plenty of hiking opportunities in a place that needs it most. https://www.wta.org/news/signpost/reviving-an-old-route-to-the-pratt https://www.wta.org/news/signpost/reviving-an-old-route-to-the-pratt/@@download/image/MVIMG_20200710_102706.jpg

Reviving an Old Route to the Pratt

WTA has been hosting annual work parties and Backcountry Response Teams along the Pratt River Trail since 2016 as a part of our Lost Trails Found campaign. We're working to save this alternate access point into the Alpine Lakes Wilderness and ensure plenty of hiking opportunities in a place that needs it most.

If you’ve ever hiked to Pratt Lake near Snoqualmie Pass, you’ve likely taken the popular route off of Forest Road 9034 on I-90. It’s a great 11-mile roundtrip trek that attracts day hikers, trail runners, families and backpackers alike. Passing by the quaint Olallie Lake and stopping along scenic Snoqualmie viewpoints, it’s a great route in its own right.

But this hasn’t always been the only way to reach the Pratt Lake Basin. Hikers once had another backdoor route to this alpine lake. 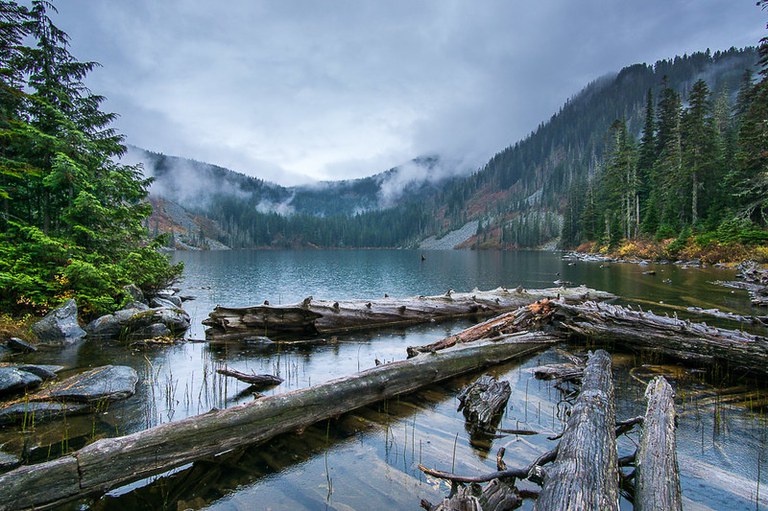 The Pratt River Trail is a long, lonely, oft-forgotten route starting from the west along the Middle Fork Snoqualmie Road. The trail travels 11-miles up a long and forested river valley, alongside the rushing Pratt River (designated as a National Wild & Scenic River) and ending with a long set of switchbacks before reaching the Pratt Lake Basin. It’s a wonderful alternative for hikers seeking close-to-town solitude, and it can be used to create a multitude of overnight or multi-night traverses or loops through the popular Alpine Lakes Wilderness.

But... the Pratt River Trail has seen better days. Until recently, the Pratt River trail had been notoriously difficult to reach — requiring a dangerous crossing of the Snoqualmie River that was only passable in the heat of summer when water levels dropped. Trail maintenance was rare, and it showed. Trip reports from as far back as 1997 note the poor conditions after the ford, citing that “the trail appears to vanish in ferns, brush and blowdowns” and “the Pratt River trail is disappearing fast.”

To make maintenance of the Pratt River Trail more viable, WTA volunteers worked alongside forest service contractors to rebuild the Pratt Connector Trail in the early 2010’s. The new 3-mile connection linked together the Middle Fork Snoqualmie Trailhead and the Pratt River, giving hikers — and trail crews — the opportunity to cross the river via the impressive Middle Fork bridge, rather than attempting a ford. 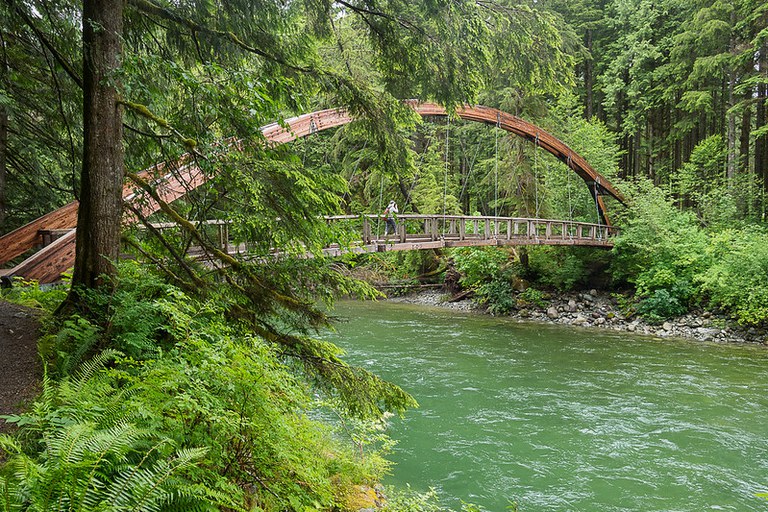 The Middle Fork Snoqualmie bridge now serves as a safe starting point to the Pratt River Trail, thanks to the volunteer-built connection. Photo by John Merrill.

With a sparkling new access point in place, it was possible to get to work on the deeper sections of the trail. Fallen trees and brush had overtaken much of the Pratt’s trail corridor and few hikers ventured beyond the well-maintained connector trail. Trip reporters who ventured deeper often turned around well before the lake due to the poor conditions.

Years-long effort to Restore a fading path to Pratt Lake

To reopen this fading route and prevent the trail from becoming completely lost, WTA has been hosting annual work parties and Backcountry Response Teams (BCRT) along the Pratt since 2016 as a part of our Lost Trails Found campaign. We're working to save this alternate access point into the Alpine Lakes Wilderness and ensure plenty of backcountry hiking opportunities in a place that needs it most. While the path isn't fully cleared yet — we're getting closer and closer every year, and we're excited to get this full route back into hiking shape.

“Many years ago we couldn't ‘make the turn’ [past the connector trail] because the vegetation and downed logs were so thick. Now, we can go many more miles — all through the work of volunteers using hand tools and crosscut saws,” says Liz Ulloa, a volunteer chief crew leader who has been working on the Pratt since 2010. 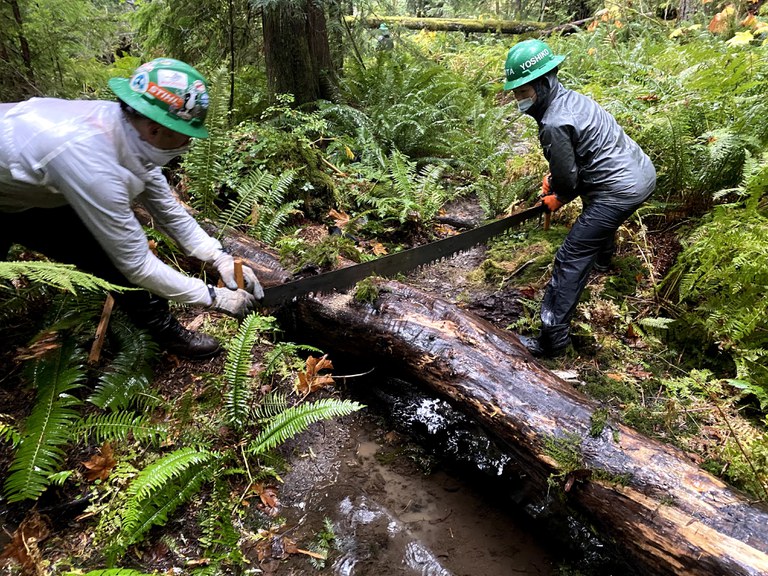 Rain in the forecast? No problem for these volunteers! Photo by Emily Snyder.

Last summer — not even a global pandemic could stop us from getting a bit of work done. With smaller crew sizes and extra safety precautions, we held 17 days of volunteer trail work between Pratt Lake and the start of the connector.

Our early-season BCRT started up high from their camp around Pratt Lake and worked down toward the switchbacks, cleaning up 38 fallen logs from the trail and polishing up the trail surface around them. Two late-season BCRTs then came through from the valley floor, camping midway up the river. They cleared 32 more fallen trees, dug out new drain dips to divert water off the trail, cleaned up puncheon decking over boggy areas and cleared encroaching plant life from 300 feet of trail. 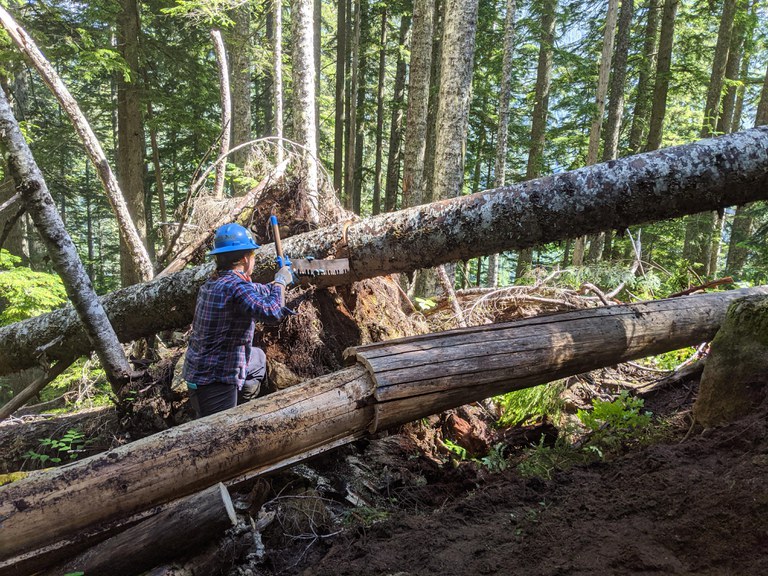 This summer, we've kept up the momentum with an early June BCRT to the Pratt — accomplishing some much needed seasonal maintenance ahead of the busy summer season. The 6-person volunteer crew, lead by Liz, made a big push to the lake. The crew logged out every remaining fallen log from the trail up until the 8.25 mile mark, just short of the first switchback toward the lake. The work's not done, but after a decade of work, the possibilities for the Pratt River Trail are becoming reality.

“I’m hopeful this trail will be fully open within the next 5 years so it can be hiked as a thru-hike. I've only been about 8.5 miles in from the Middle Fork side, and I’ve been to Pratt Lake on the other end,” Liz said. “Seeing the completed trail would be amazing. The whole valley is such a beautiful place, with its feeling of remoteness and wildness. I want to share it with others.”

With the help of our volunteers and members, we're looking forward to a full summer of work restoring access to the Pratt and so many other backcountry destinations across the state. To keep up with the latest on our Lost Trails Found campaign and to find out how you can help, head to wta.org/losttrails.

Stuke Sowle on Reviving an Old Route to the Pratt

This is amazing! A huge thank you to all who have worked so hard to get this trail back into shape. As the article states, it opens up so many possibilities in this area!

nivla.nibura on Reviving an Old Route to the Pratt

I used the Trailhead Direct in 2018 to access Mason and Pratt Lakes (via Granite Creek), and returned via the Pratt River Trail the next day.
Dozens (or perhaps likely, hundreds) of downed trees, eroded culvert ravines, and a difficult array of ribbons showed its neglect.
Can't wait to see this corridor (the second between Middle Fork and I-90!) allow for more awesome loops and thruhikes!

Drfelice on Reviving an Old Route to the Pratt

I love the middle fork And am so excited about the progress. Thank you!

ALW Hiker on Reviving an Old Route to the Pratt

I loved reading this story and about the Lost Trails Found campaign. I've been to both ends of this trail and it will be great to have another way into this part of the ALW.

Thank you for all the hard work!

EandM on Reviving an Old Route to the Pratt

Thank you. Two years ago, I counted over 200 downed logs from the main Middle Fork to about the 'big tree'. Last year, this was mostly clear and the traveling much easier.

QuahHiker on Reviving an Old Route to the Pratt

I've been to the Big Tree spur from the north, and just yesterday was at Pratt Lake to the south. For some time now I've longed to connect the two but never took the chance to try this "unmaintained" trail. Looking forward to its completion!

Thanks, WTA and volunteers for this work and all the trail work that you do. You allow us to take in the wonder of our surroundings without having to worry about the placement of every step!

furi_and_the_great_outdoors on Reviving an Old Route to the Pratt

This is fantastic! I remember my first time trying to take the Pratt River Trail when I was exploring many of the trails in Middle Fork the first summer I arrived in WA. It was so overgrown that I ended up turning back. Every time I look at Gaia I wonder if I should try again and now I know that I need to be patient. Thank you all for the hard work and I'm glad to contribute indirectly to this progress by being a donor.