Skip to content
Lost Trails Found Crews Crush This Season With 58 Miles of Trail Work WTA’s Lost Trails Found crews have earned a nice rest and many thanks from hikers after spending a whopping 6,790 total hours in the field doing trail maintenance this summer! Check out all the work our crews got done over the season. https://www.wta.org/news/signpost/lost-trails-found-crews-crush-this-season-with-58-miles-of-trail-work https://www.wta.org/news/signpost/lost-trails-found-crews-crush-this-season-with-58-miles-of-trail-work/@@download/image/LTF group photo at Cow Creek by Zachary Toliver.jpg

WTA’s Lost Trails Found crews have earned a nice rest and many thanks from hikers after spending a whopping 6,790 total hours in the field doing trail maintenance this summer! Check out all the work our crews got done over the season.

WTA’s Lost Trails Found (LTF) crews have earned a nice rest and many thanks from hikers after spending a whopping 6,790 total hours in the field doing trail maintenance this summer!

After a tremendously successful pilot with a single crew in 2021, the LTF professional crew program (previously called the pro crew) returned for a second season. This year, with two crews, we were able to expand the program’s reach from Okanogan-Wenatchee National Forest to include Mt. Baker-Snoqualmie National Forest.

Our Lost Trails Found campaign revitalizes backcountry trails in desperate need of maintenance, and our professional LTF crews are a large part of that effort. The paid crews are able to reach remote locations that aren't feasible for volunteer work parties. They are also able to handle technical projects involving tools or techniques that may require additional training. 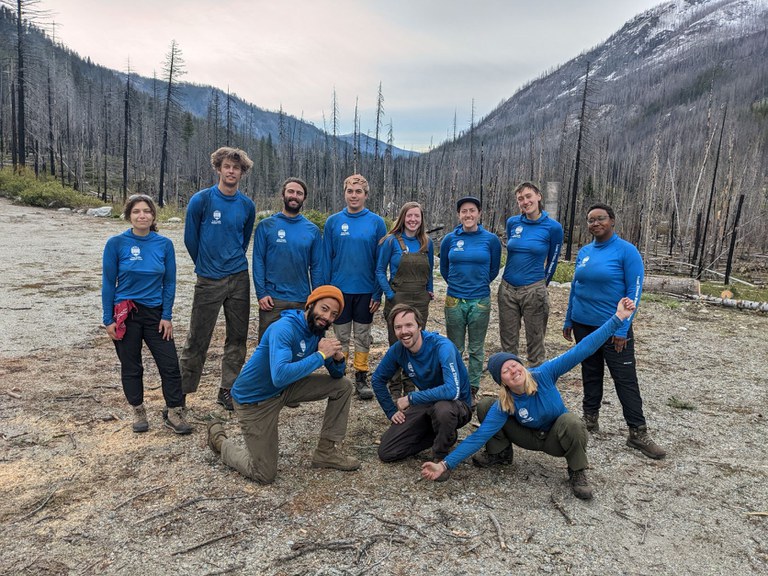 MUCH TO BE PROUD OF

By building upon what last year's crew learned and taking advantage of the expansion to two crews, the hard-working LTF crews accomplished a huge number of diverse projects across the state.

Our LTF crews gave many trails much-needed love this summer. Check out some of the transformations! Photos by Ginevra Moore, Zachary Sklar and Zachary Toliver.

On a weeklong trip to Hidden Lakes in the Pasayten, one of the crews logged out 1,615 logs — more than the total number of logs cleared all of last season. That same week, the other crew pulled out the hand tools and brush cutters to clear nearly 5 miles of the Bluff Mountain Trail in southwestern Washington.

The LTF crews headed back to the Entiat Valley region to continue the work the pro crew did last year and start work on trails last year's crew didn't get to. Overall, the crews removed 544 logs from trails in the region, restored 1,990 feet of tread and brushed 9.6 miles.

"Spending two consecutive summers in the Entiat has given me a new perspective on what it is like to see a trail system recover after a significant event like the 2015 Wolverine fire," said LTF crew leader Ginevra Moore. "Watching the understory begin to regrow and being a piece of the constant effort that different groups are putting into restoring this trail network has been really special."

Our crews also returned to the Pacific Crest Trail (PCT) after working at Snowy Lakes in the North Cascades last year. In the Pasayten, the crew repaired 310 feet of the PCT north of Hart’s Pass, then shifted work to the West Fork Pasayten River Trail, where they logged out 120 logs from 6.5 miles of trail. The Mineral Creek trail — a 5-mile entry/exit point for the PCT near Salmon La Sac — was entirely transformed over three LTF crew trips.

"The trail was seriously overgrown and the tread had deteriorated pretty badly in some spots, so it wasn't getting very much use," said Zachary Sklar, LTF crew leader. "I was so proud that we helped to reopen a pathway to an incredible wilderness area that just needed a little bit of love to be a lot more viable for a lot of people."

Near Stehekin, the LTF crews cleared over 200 logs from the Tenmile Creek trail and 112 logs from the entire length of the Company Creek trail — almost 11 miles — many of which were over 20-30 inches in diameter.

The crews also spent some time on more well-trafficked trails completing critical projects outside the scope of our typical volunteer work parties. The LTF crews made three trips to Melakwa Lake this summer, working with Alex Weinberg, I-90 recreation manager for the Snoqualmie Ranger District, who manages many projects along the interstate.

“I wanted to try out WTA’s LTF crew for the project since I had heard positive feedback about them from the previous year, and because the project was too technical for volunteer crews,” Alex said. “When all was said and done, they were able to accomplish everything I laid out for them, and then some.”

Among the crew's many accomplishments included constructing five staircases, 13 rock steps and multiple large rock support structures. And they found time to repair and remove obstructions from the trail, restoring 1,450 feet of tread.

Further north, in the Mount Baker Wilderness, one crew installed 26 rock steps and repaired existing support structures on 1.5 miles of the oft-hiked Chain Lakes Loop. On a separate trip, a crew maintained 2 miles and completely repaired 40 feet of the popular Bridal Veil Falls and Lake Serene trails, which involved difficult rock work, including the removal of three large boulders.

For their last trips, one crew went to the Crooked Creek trail in Umatilla National Forest to work on maintaining 4.6 miles of trail and clearing 56 logs — the largest was 48 inches wide! The other crew worked on the Icicle Creek and lesser-used Leland Lake trails in the Alpine Lakes Wilderness, clearing 134 logs and brushing through some gnarly plants — like huckleberry, devil's club and slide alder — on over a mile of trail.

To say our LTF crews accomplished a lot in just under 4-and-a-half months is an understatement.

Although trail work was the priority, the moments bonding with one another will stick with the crew.

"What really made this season so great was just the spectacular group of humans I got to hang out in the woods with every day," said Sklar. "Everyone on both of the crews is so kind and hard-working and hilarious."

And we couldn’t have done it without our partners at the Okanogan-Wenatchee and Mt. Baker-Snoqualmie National Forests.

“The evolving partnership between WTA's pro crews and Forest Service trails programs offers a hopeful glimpse into the future of collaborative trail work,” said Claire Thompson, trail partners coordinator for the Entiat Ranger District. “It was especially cool to work with the LTF crew in the program's second year and see the crew's collective level of experience and skill deepen.”

Our crews were made possible by funding through the Great American Outdoors Act as well as the Beda Family; Anna and Dick Armstrong; and other generous individuals.

WTA is excited about the future of our professional crews — continuing to keep our backcountry trails alive and work on more complicated technical projects. Stay in the know about our future crews and Lost Trails Found work, and learn about how you can help.

So wonderful!! Thank you for your hard work!

Fabulous work! Thank you so much, LTF teams, and thanks for this report.