Hiking is widely acknowledged as a way to get away from it all: to unplug and disconnect. But the history of where we recreate is complex. Our trail system is built on land taken from Native people, neighbors who still have deep cultural and legally-protected connections to the land.

Many state parks are former forts — echoes of past policies that had more of an effect on citizens than on national security. Even urban hiking reveals historic inequities. Affluent neighborhoods feature large parks with miles of trails, while neighborhoods with histories of redlining lack easy access to greenspaces.

Coming to grips with the history of a place can be uncomfortable and hard to sit with. But understanding the full complexity of our past — both our accomplishments and our darker decisions, may help avoid perpetuating injustices.

Next time you visit one of these places, do so with a willingness to learn its history. It may give you a more well-rounded understanding of our history. The short summaries below are highlights of deep, rich histories and stories. Links are provided to kick off further research. 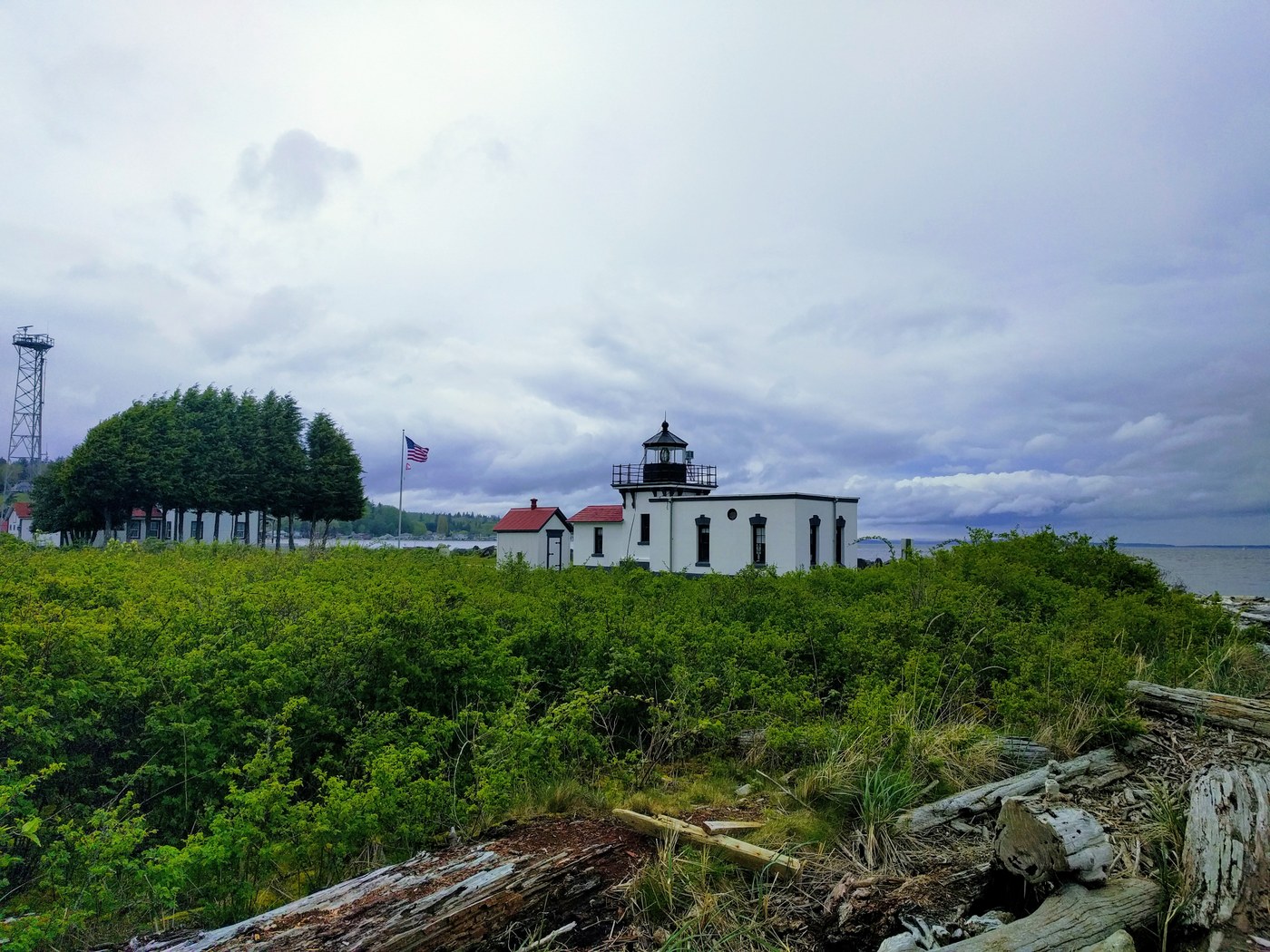 The lighthouse at Point No Point. Photo by Drew Boles.

This is where the Point No Point treaty was signed between the territorial governor Isaac Stevens and the S'Klallam, Chimacum, and Skokomish Tribes. It ceded lands between the Olympic crest and Puget Sound to the U.S. government, and established reservation lands. The Point No Point Treaty Council was established in 1974 to ensure treaty rights are observed and help support the tribes affected by the treaty, which is still in effect, and gives the tribes hunting, gathering and fishing rights on public lands. Point No Point is on the National Registry of Historic Places. 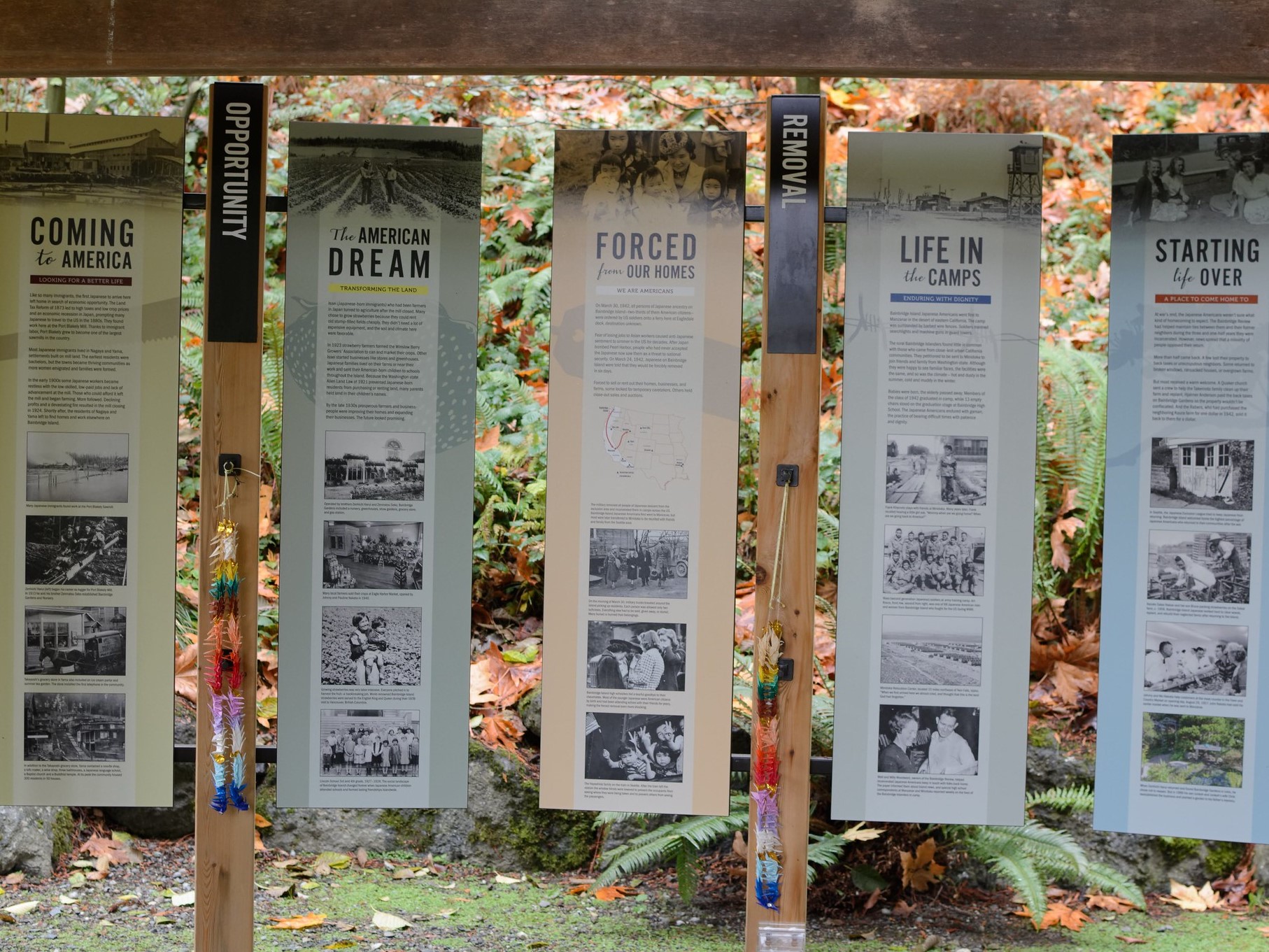 Informative signs at the memorial. Photo by Jen Gradisher.

On March 30th 1942, the Japanese American citizens residing on Bainbridge Island were gathered at the Eagledale Ferry Dock and sent to an incarceration camp in Manzanar, California, then transferred to Minidoka. This was the first action on an executive order that allowed the War Department to create zones to exclude Japanese American citizens, in response to the attack on Pearl Harbor. This memorial on Bainbridge Island stands as a reminder of that racist policy. The trail here follows the path the residents took to board the ferry.

Learn More: One of Washington's Japanese American citizens who was interned at Minidoka was Fujitaro Kubota. After emigrating to Seattle in 1907, he cultivated a reputation as a sought-after designer, working on the Seattle University campus and creating the breathtaking Kubota Gardens. After internment he returned to Seattle and resumed his career. 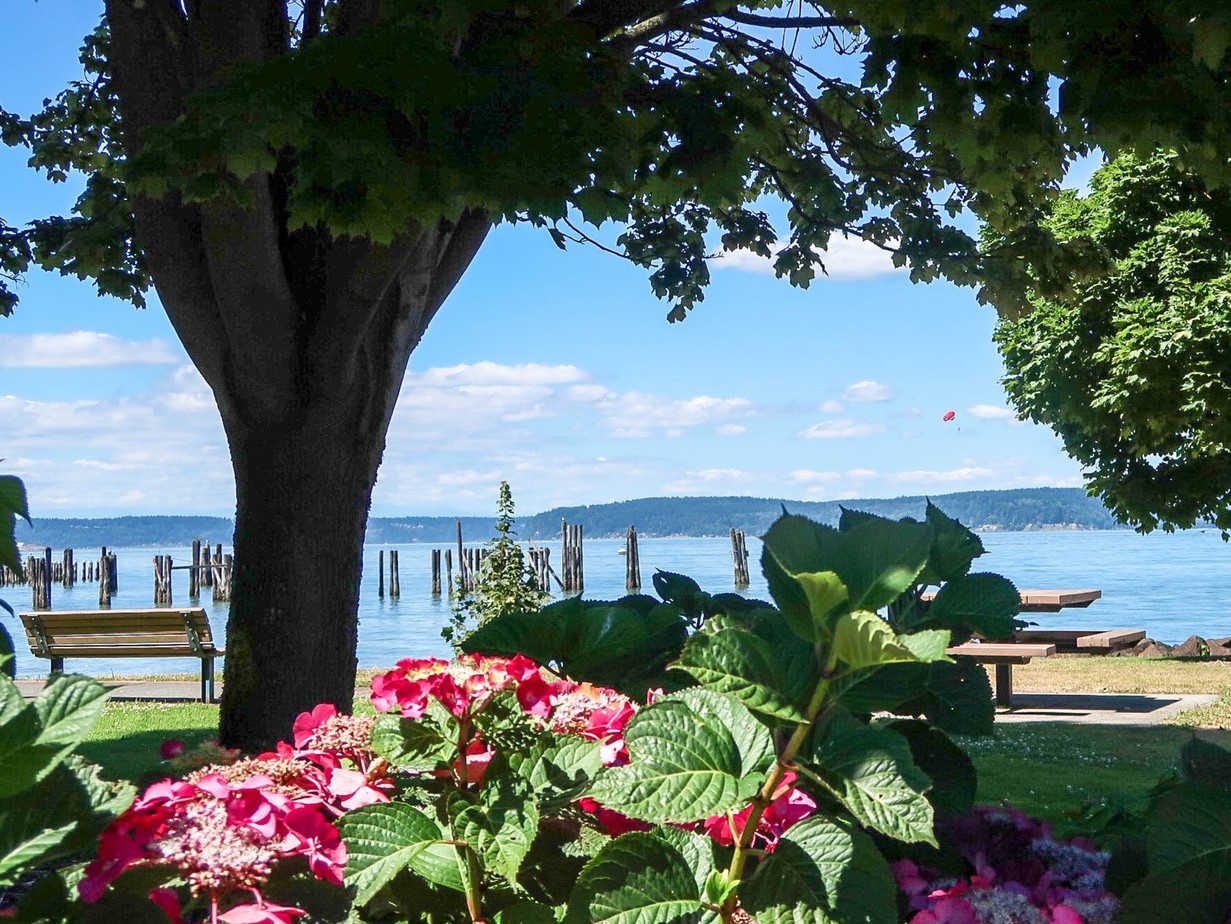 Judge Jack Tanner was the first Black judge from the Pacific Northwest to serve on the federal district court bench. Born in Tacoma, he consistently fought for Black and Native American rights, including participating in the fight for Native American fishing rights.

This park, formerly Marine Park, was renamed in 2018. The choice of a waterfront park was not accidental. He put himself through college as a longshoreman, and one of the more well-known stories of him as a judge involves a case about pollution of the city’s waterways. 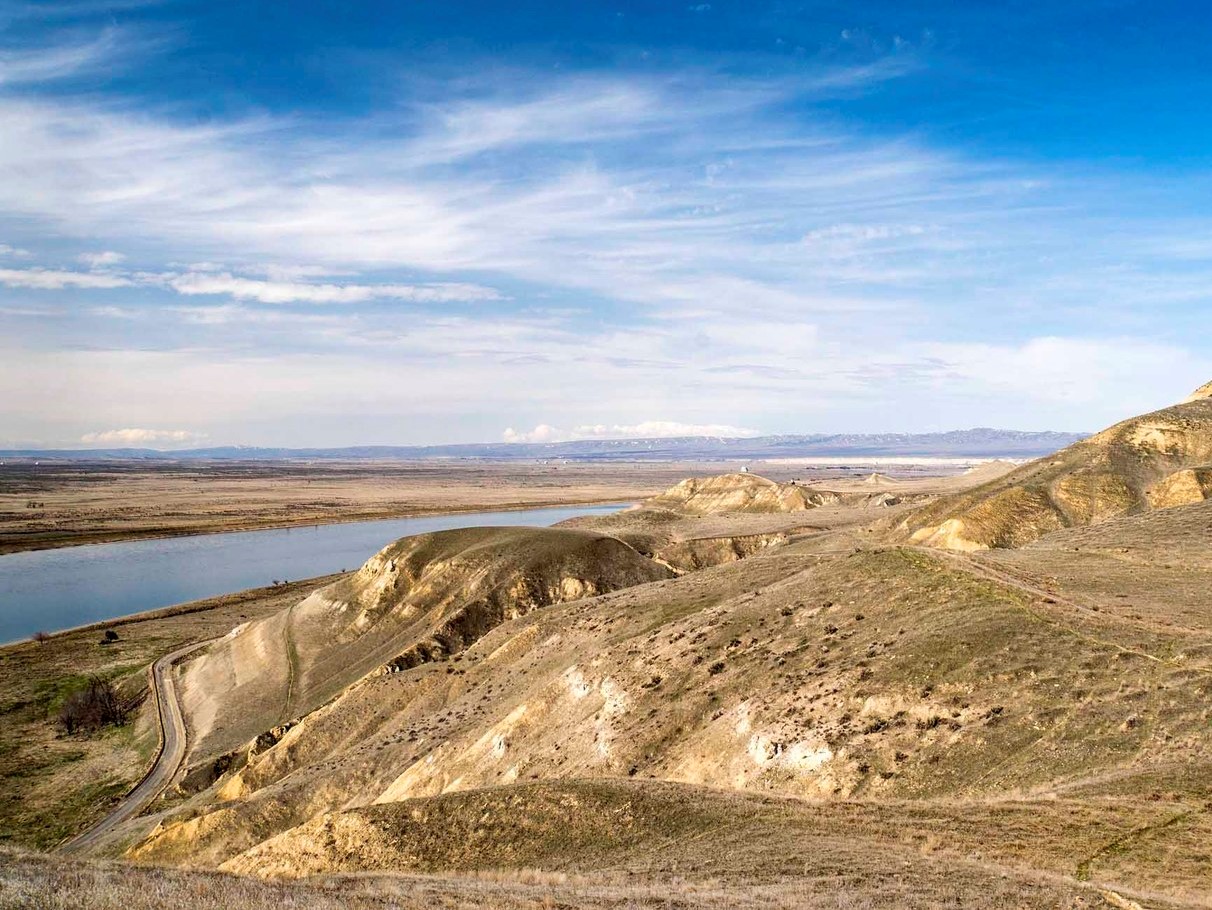 Many people know this area as the site of the Manhattan project and the development of the atomic bomb during World War II. But before that, the mid-Columbia basin in this area was a burgeoning farming community. In early 1942, when the War Department decided to relocate the Manhatten project here, residents in the town of White Bluffs and Hanford were told to abandon their homes and farms, given a small amount of money and just 30 days to comply. Hiking in the White Bluffs area (now a national wildlife refuge) offers a view of how large the Hanford campus is. Several defunct reactors are visible from high points on the bluffs.

Learn more: Also visible (albeit barely) from the White Bluffs is one arm of LIGO, (the Laser Inferometer Gravitational Observatory). In 2015, scientists here made history when they made the first observation of gravitational waves, a breakthrough 50 years in the making. 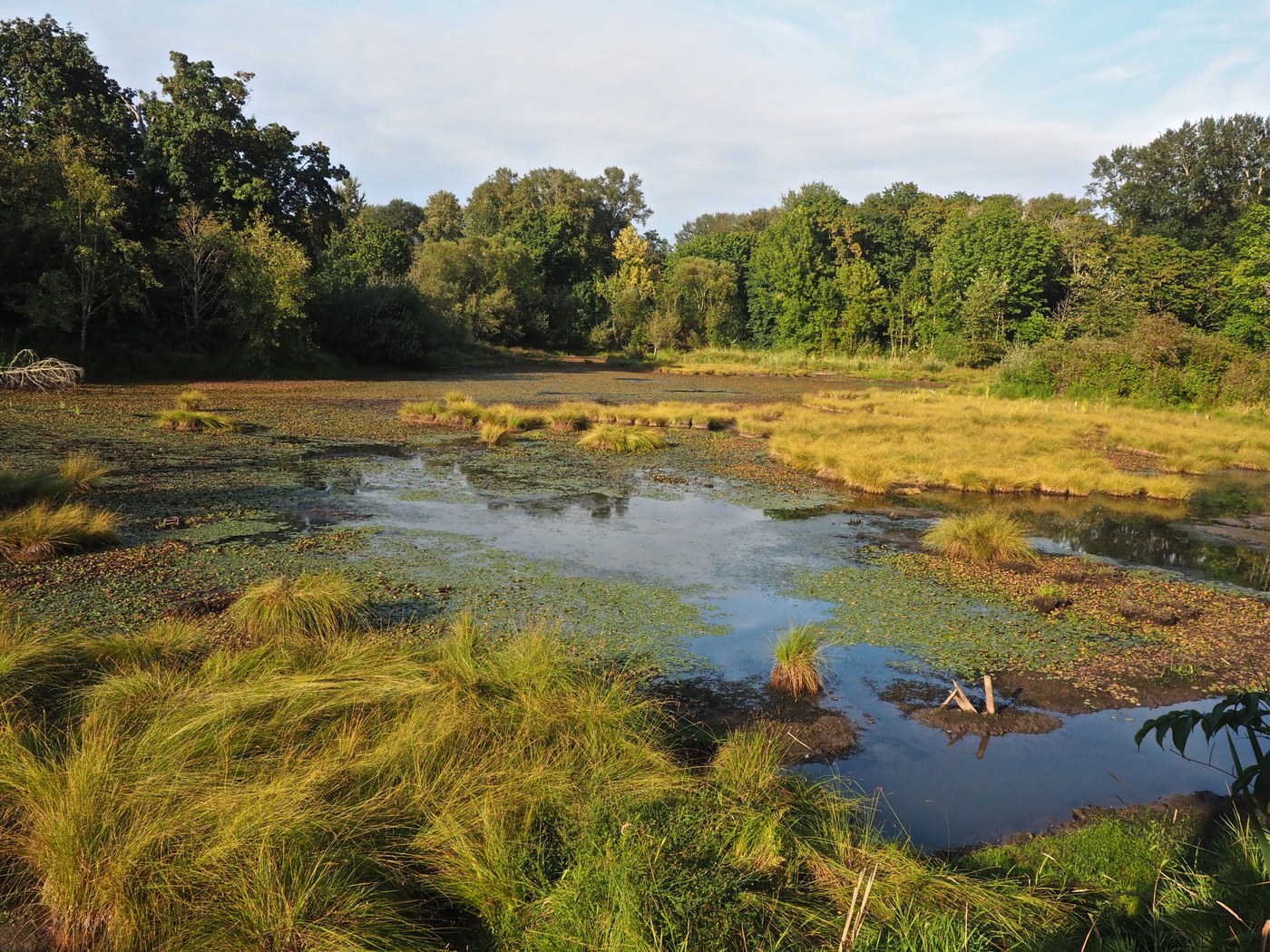 A lush pond near the visitor center. Photo by trip reporters Bob and Barb.

This national refuge was renamed for Billy Frank Jr. in 2015, a Nisqually tribal member who fought for Native American fishing rights and was crucial in helping preserve the entire area as a refuge.

Frank's work on the Boldt decision, which established the refuge in 1974, also restored Nisqually tribal treaty rights in Washington. These allow tribal members to fish their "usual and accustomed places." Thanks to Frank, visitors can see wildlife thriving in the Nisqually delta, and the area continues to play host to an array of species. 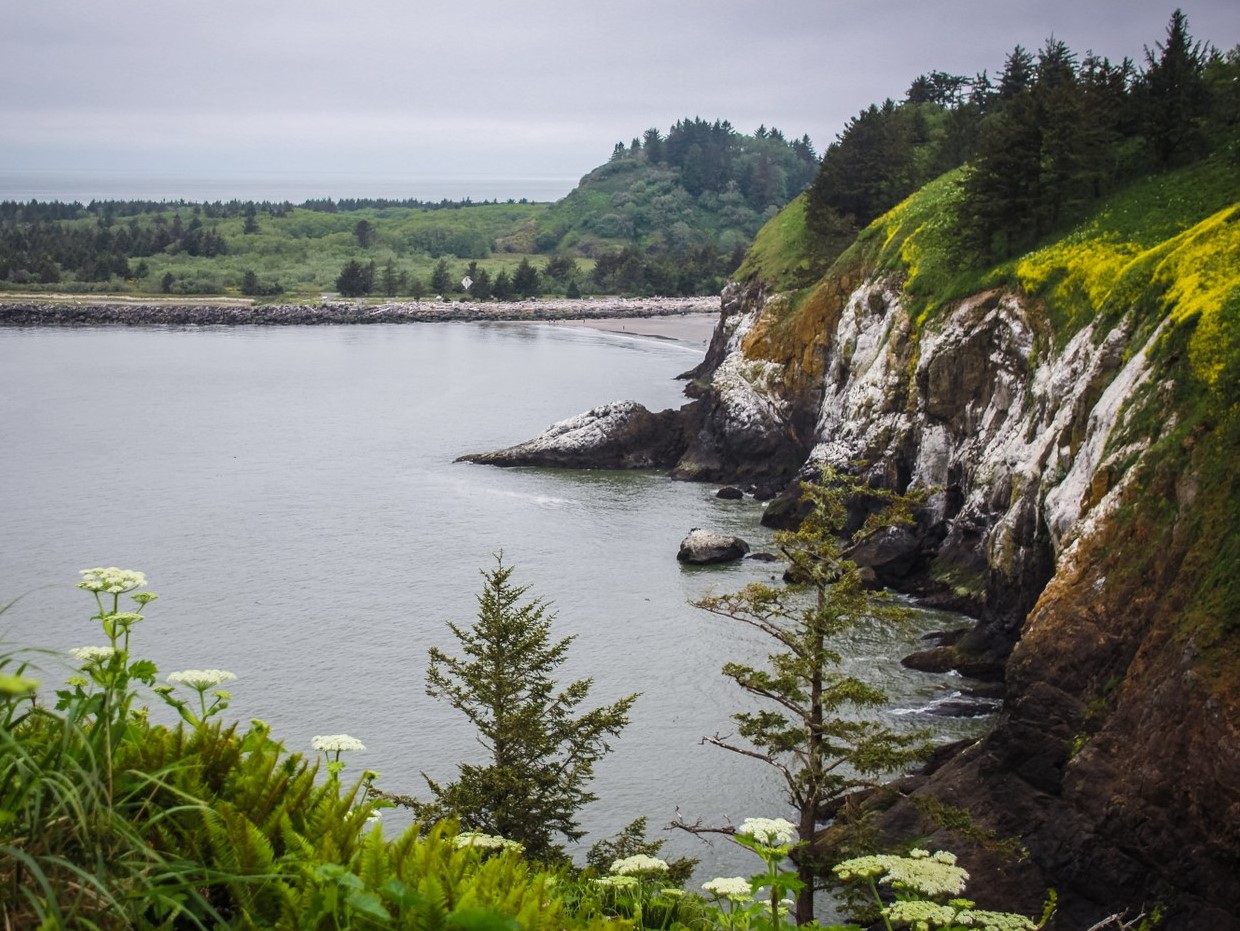 Wildflowers peeping above the cliffs at Cape Disappointment. Photo by trip reporter WonderSmash.

Sitting on the bluff above where the mighty Columbia River empties into the ocean, this State Park tells the well-known story of the Lewis and Clark expedition but also digs into the destructive effects of westward expansion on Native American Tribes that resulted from this journey.

The story of the Corps is a complex history of colonialism, slavery and westward expansion. Crucial to the journey's success was Sacagawea, a Shoshone woman who at 18 was the youngest member of the party by far. Her name is ubiquitous in Washington; statewide, many trails bear her name. But far fewer people would recognize the name York, William Clark's slave who was the only Black man on the Corps of Discovery. York had equal standing as that of White men on the journey, including a full vote, but Clark refused York's initial requests for freedom upon their return east. 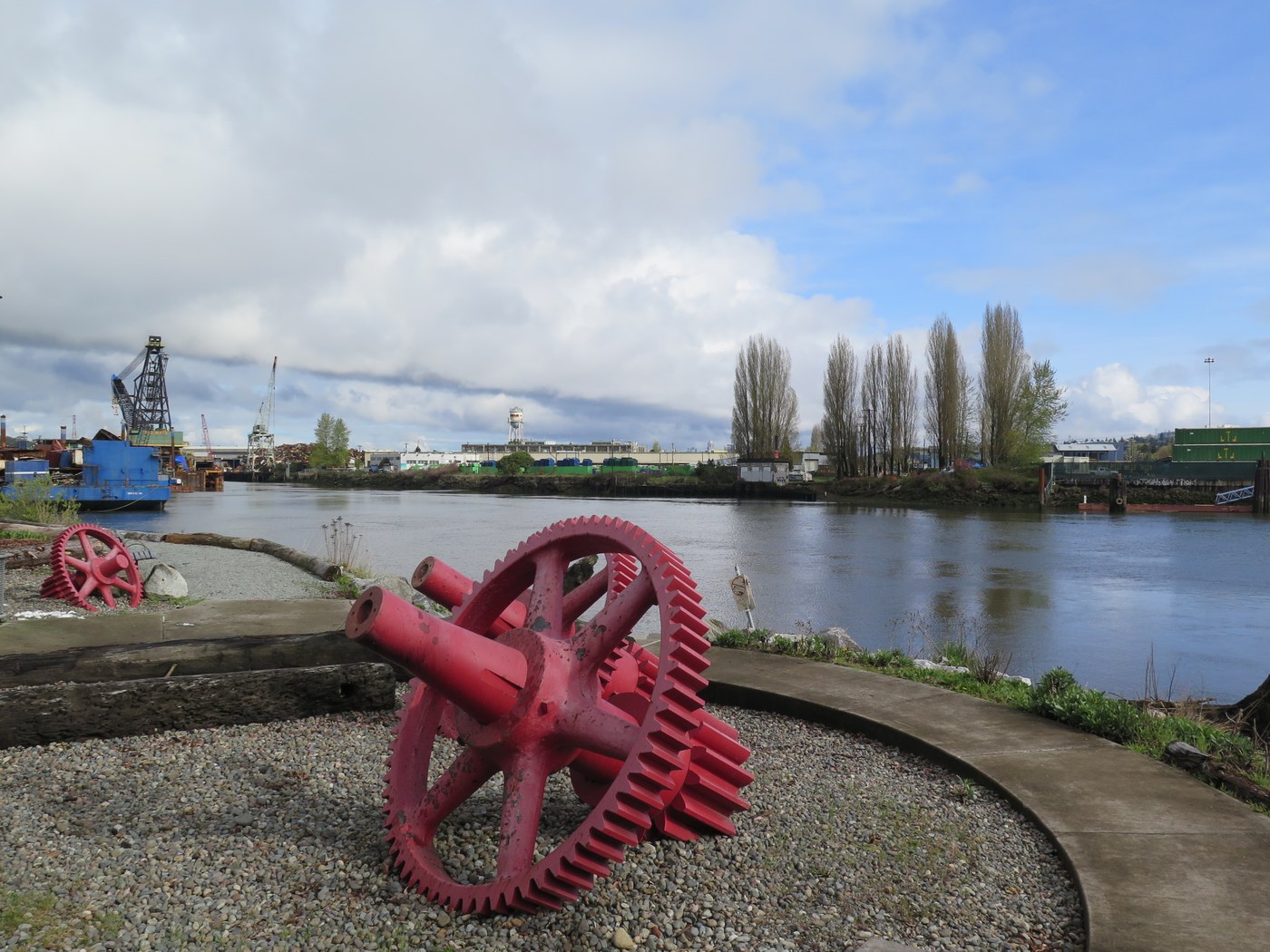 A view over the Duwamish River. Photo by trip reporter wafflesnfalafel. 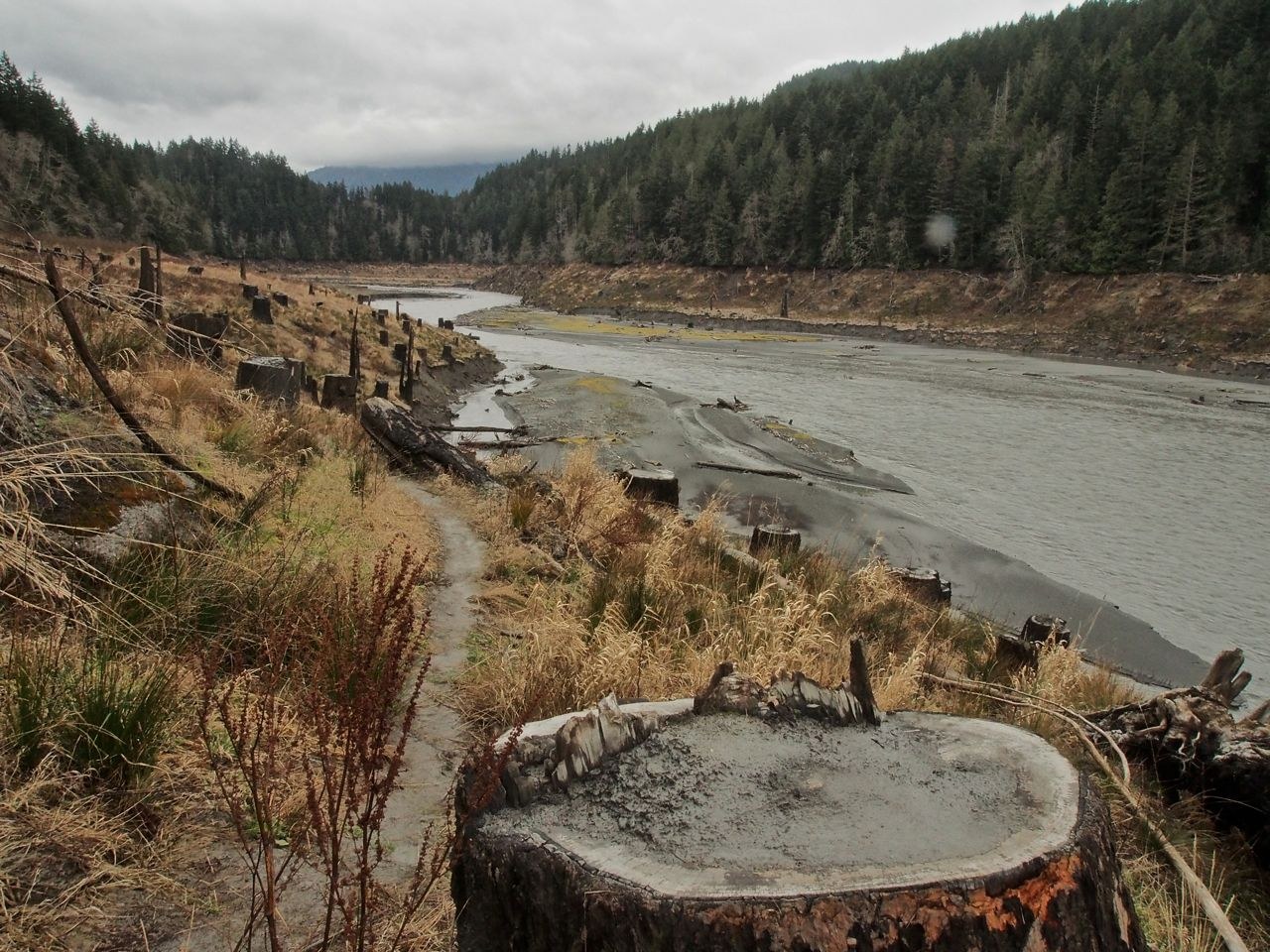 If you’ve heard of the Elwha dams removal, you know the enormous positive impact this project had on the ecology of the river, but you may not know about the cultural impacts to local tribes or the back story of how this monumental feat came about. The removal of these dams was the result of years of advocacy led by the Lower Elwha Klallam Tribe. Visit this site of the former lake created by one of the dams, and reflect on the impact of the dam and its removal. 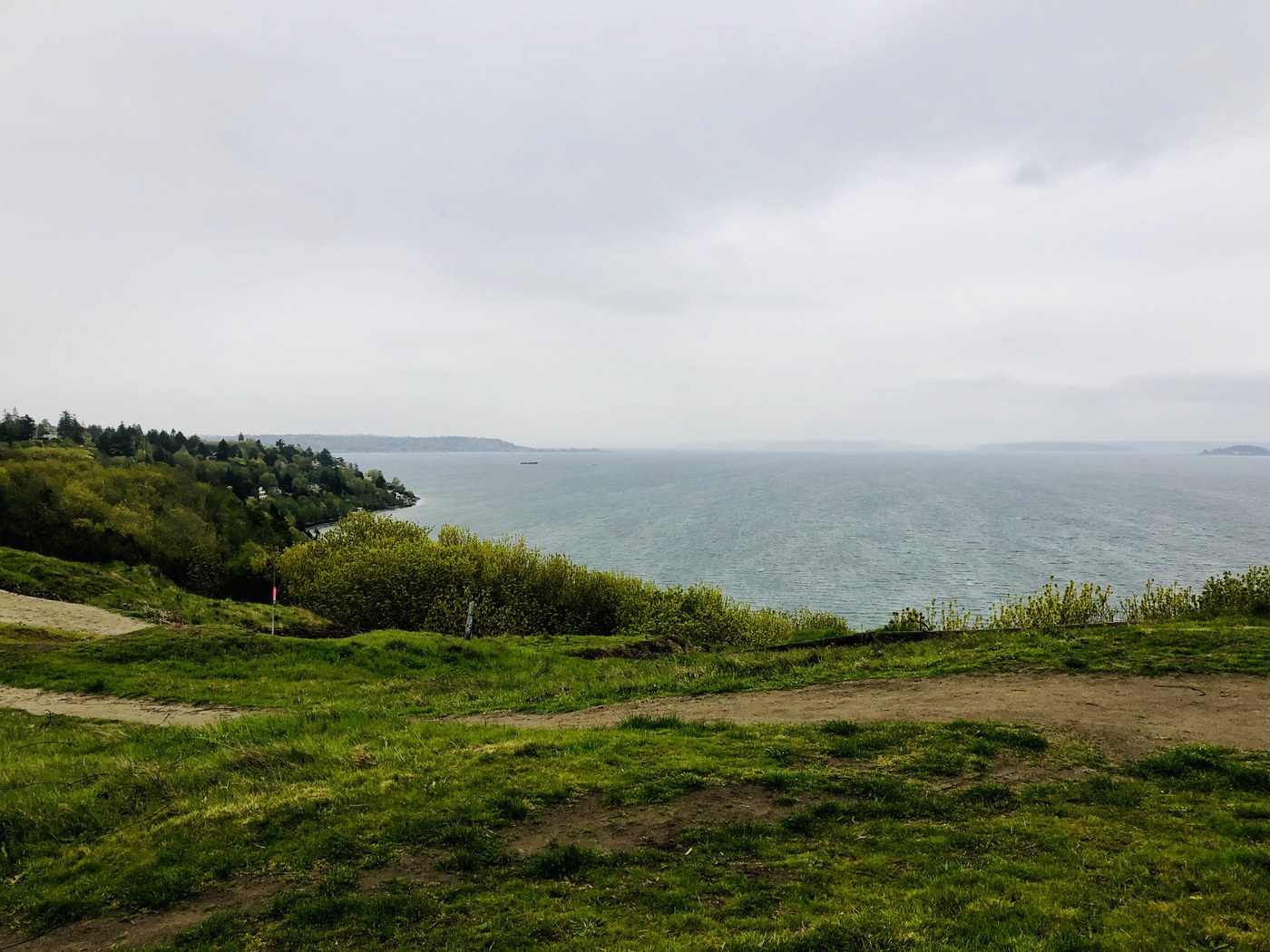 Views over the Puget Sound from Discovery Park. Photo by trip reporter kbgoesoutside.

Most visitors to Seattle’s Discovery Park may be aware of its history as a military base, but this park also houses an historic achievement in the advancement of Native American Rights in the Seattle area. The Daybreak Star Cultural Center is the result of a non-violent occupation from Native American activists to gain control of this land in order to better serve their community. Next time you’re out walking or jogging, take some time to learn this history. 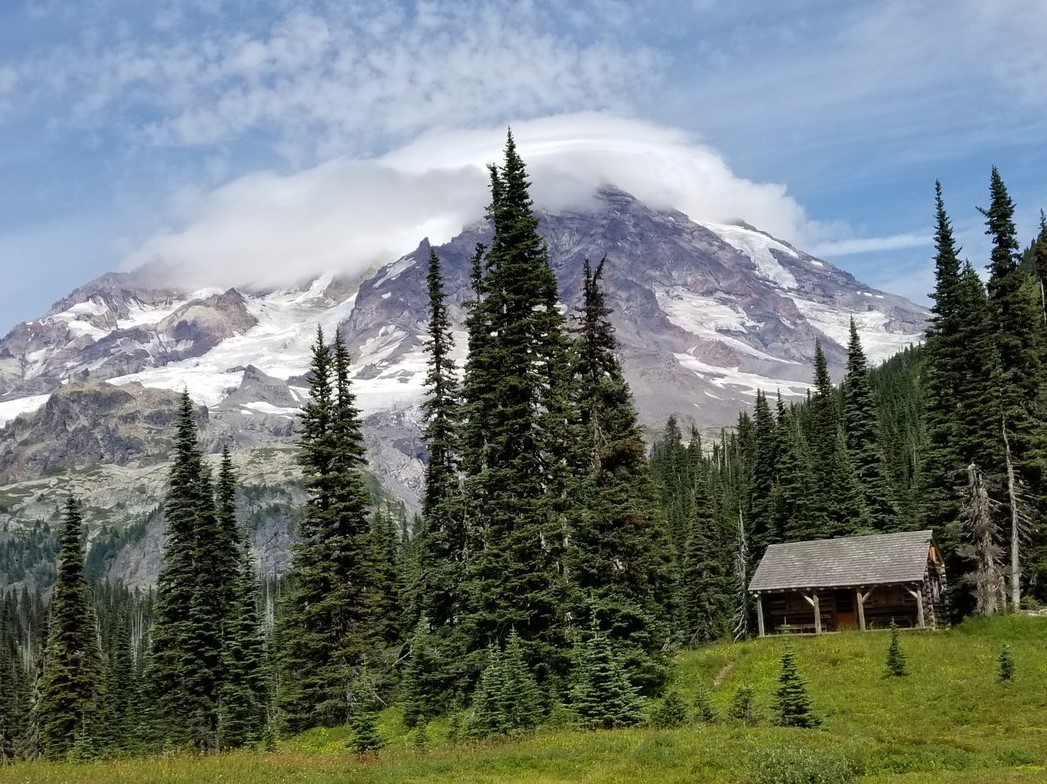 An incredible view of Mount Rainier from the cabin. Photo by trip reporter charlie girl.

This meadow, situated on a southwest section of the Wonderland Trail, was home to a Native American man named So-To-Lick. A mail carrier who deemed So-To-Lick too hard to pronounce, dubbed him Henry. So-To-Lick assisted the likes of John Muir, George Bayley, James Longmire and Philemon van Trump in navigating sections of the massive mountain, but never summited it; he considered the mountain sacred, never venturing onto the glaciers himself.

So-To-Lick blended Native American culture with White social practices, creating a unique lifestyle in the shadow of Rainier, establishing a small community on the Mashel Prairie in the late 1860s and filing a homestead claim in 1895. 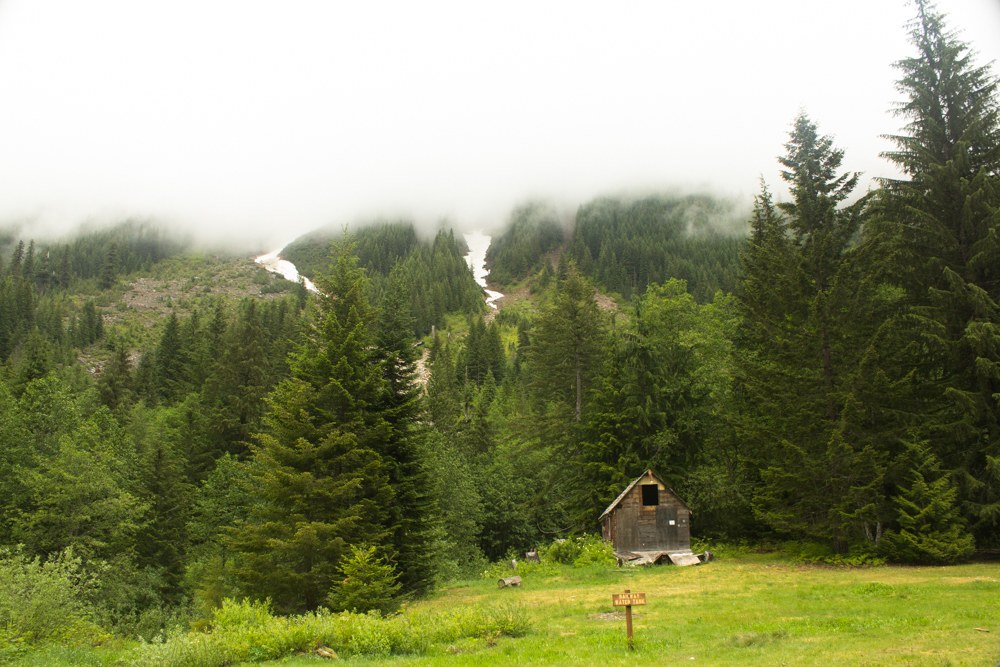 Well-known as a former mining town, Monte Cristo also housed Japanese American labor crews, who helped build and service rail lines and lived in the town nestled in the north Cascades. The area is now a ghost town, and popular with hikers. Tours highlighting the history of Japanese American laborers here and in other parts of Washington are available through Seattle's Wing Luke Museum.

Learn more: Another Washington ghost town, Wellington housed more than 800 workers, many of whom were of Asian descent, who laid the train tracks across the Cascades through Stevens Pass. Visit the town and learn more about this history from the Wing Luke Museum, or by hiking the Iron Goat Trail. 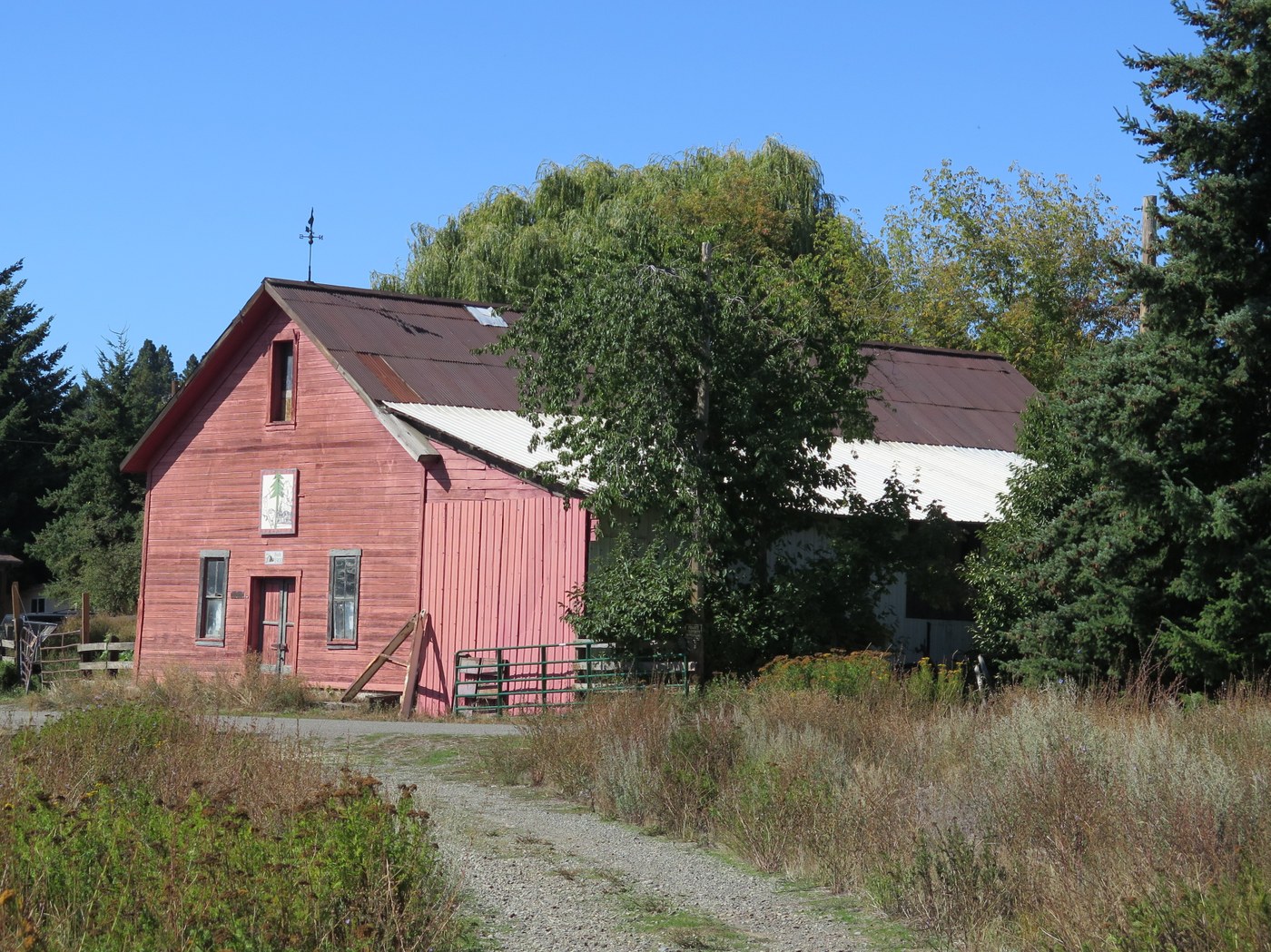 A historic barn along the Coal Mines Trail. Photo by trip reporter wafflesnfalafel.

In 1886, the first commercial coal mining operations started in Roslyn. People flooded Roslyn to work for the company but after two years, workers began striking, and the company recruited strikebreakers from out-of-state. These recruits — many of them Black — were unaware they were breaking a strike. After the strike, tensions between the miners and the strikebreakers eased and many of the Black miners and their families remained in Roslyn.

Learn more: As the mines closed, Black families gradually left. In 1975, William Craven, one of the only Black men left in Roslyn, became Washington's first Black mayor. First appointed to the position, he ran in the next election cycle and won, serving until 1979. Read more about the history of Black miners in Roslyn and the legacy of the Craven family.